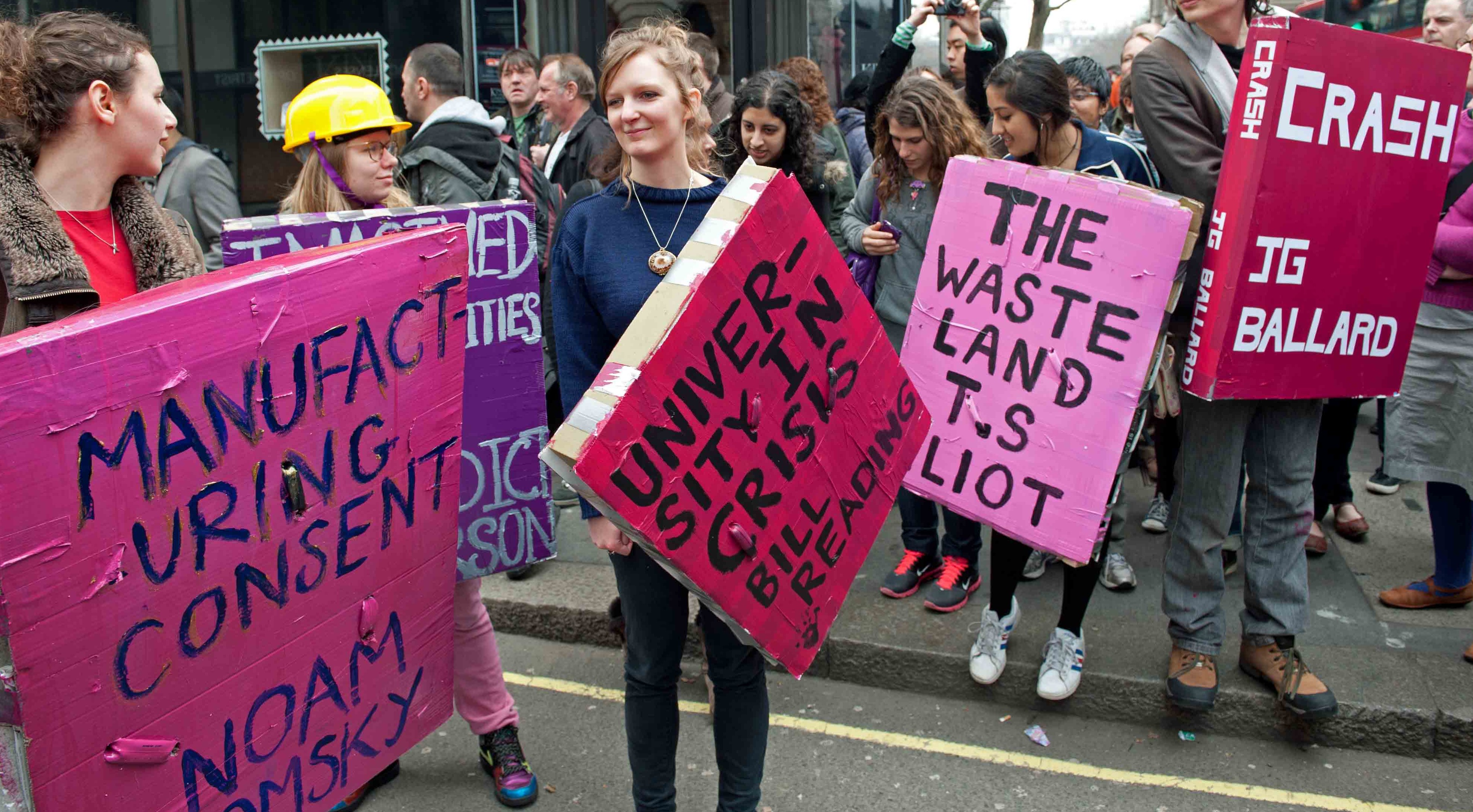 There’s a growing amount of discussion in the UK about ‘radical librarianship’: a concept that covers a range of ideas about political engagement in librarianship and information studies. 2015 sees the launch of the Journal of Radical Librarianship: a new publication attempting to capture some of that discussion and disseminate it to a wider audience in an open and critically rigorous way. Fundamentally we want to promote discussion about the political nature of librarianship and to discuss radical alternatives to current practices and prevailing thinking in the profession.

Broadly speaking, ‘radical librarianship’ could be said to be a focus on the ethical roots of librarianship. Some of these ethical considerations are articulated by authors like Froehlich1 and include respect for the individual and individual freedom, social responsibility, and organisational obligations. Central to radical librarianship’s ethics is presenting an alternative to the prevalent trend towards marketisation of libraries. Over the past few decades, libraries have shifted towards a market-oriented approach: one that emphasises marketised solutions to service provision (that is, solutions used in the private-sector free market environment).

For example, Clark and Preater (2014) point to the use of market-oriented language in professional discourse: “As a profession we have broadly accepted the idea of members or users as “customers” or “consumers”, and accepted the need to adopt market strategies to meet their needs… This is so accepted that a rejection of this approach, for example rejecting the label of “customer”, has become seen to be old-fashioned and outdated.”2 LIS ‘thought leaders’ and writers tell libraries to market themselves, to adopt the practices of successful retail chains. Social media pundits tell librarians to think about their ‘personal brand’ and to manage their online presence as if it were a social marketing campaign. An Independent Library Report for England published in December 2014 recommended to the UK Government that libraries “can only be saved if they become more like coffee shops with wi-fi, sofas and hot drinks”3. The recommendation that libraries adopt private sector service practices like this is present in a lot of professional discourse in librarianship and has been aptly chronicled in recent years by Public Libraries News and Informed.

This trend must be seen within the context of the prevailing social framework of neoliberalism. Neoliberalism can be defined as the belief “that markets are inherently efficient and that the state and public sector have no essential role to play in economic development apart from facilitating the expansion, intensification and primacy of market relations.”4 It is an emphasis on laissez-faire capitalism and the free market and the theory was a formative tenet in the economic policies of Conservative Prime Minister Margaret Thatcher in the UK and Republican President Ronald Reagan in the USA during the 1980s5. As organisations – and governments – across society have adopted neoliberal practices, libraries have followed unquestioningly. The move towards a market-oriented approach has been framed in LIS professional discourse as not just a progressive approach but as necessary to the survival of libraries. Following the trend in professional literature, librarians at management level have shaped their library’s practices to fit the neoliberal theory. The prevailing (and ‘progressive’) view implicitly “advocates a belief there is a market relationship between the service and the user, with barriers placed between the two, and reduces the relationship between libraries and users to a transactional one with the library supplying information – viewed as a commodity in a market setting.”6 Libraries have been encouraged to think of their objectivity as political neutrality and librarians have been discouraged from thinking about the political implications of their work.

Radical librarianship is an alternative position. It acknowledges that libraries are and always have been inherently political7 rather than – as has been the accepted view – politically and ideologically neutral8. It argues that the ethical roots of librarianship are openness, free access to information, and a strong community spirit – principles we apply differently to the neoliberal appropriations of those terms – and that practice in librarianship should be true to these roots. It attempts to present a real alternative to the current orthodoxy in library discourse: a discourse that sits within a wider dominant ideology of capitalism. 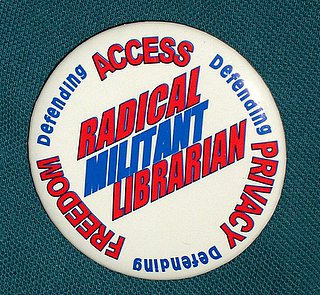 In the UK, this has manifested in the Radical Librarians Collective, a loose affiliation of like-minded library and information workers who come together to challenge the marketisation of libraries and the prevailing neoliberal position. The Radical Librarians Collective facilitates communication between like-minded people and hosts non-hierarchical events for discussion and social interaction.

At a Radical Librarians Collective meeting in London, UK, in May 2014, a group raised the idea of a publication space for writing on the subject of radical librarianship. Publishing work on radical librarianship in the form of an academic journal would be a way to bring theory and practice together. “At this stage, the most significant victory for the radical alternative is to open dialogue about the alternatives. Without dialogue, without alternatives being voiced and discussed, there is no hope for a radical alternative.”9 The Journal of Radical Librarianship will facilitate that dialogue.

The Journal of Radical Librarianship is a new open-access journal publishing a combination of peer-reviewed scholarly writing and non-peer-reviewed commentary and reviews. We’re looking for work on the subject of radical librarianship and related areas. Broadly speaking, anything that investigates the political aspects of librarianship or takes a critical theory-based approach to LIS10. The journal is available at http://journal.radicallibrarianship.org/ and is open for submissions.

Information ethics are core to the journal’s mission and so the team have made a conscious effort to adopt practices in keeping with our shared moral code. We have set up the journal in such a way as to support the exchange and reworking of knowledge: we want to make work as freely available to the public as possible and we want to encourage ‘remixing’ of the ideas in our published work11.

In practical terms, this commitment to an ethical publishing code has informed our hosting and our licensing. The journal is hosted on an Open Journal Systems platform: an open-source piece of software from the Public Knowledge Project designed to facilitate open-access publishing for journals and other publications. Works in the Journal of Radical Librarianship are published under Creative Commons licenses: either Creative Commons Attribution 4.0 (CC BY) or Creative Commons Public Domain (CC0) licenses. The CC0 license has allowed this article to reuse some of the content of the journal’s introductory editorial by Stuart Lawson12. Although under CC0 others can freely use the content without attribution to the source, articles can also be referenced normally with attribution in citations.

The focus on alternative approaches also informs our editorial team structure. The current team includes a range of people from different sectors with different experience. As we continue, we will have a fluid editorial team with a non-hierarchical structure easily receptive to change. From the beginning, we’ve focused on collective decision-making with no single person able to make big decisions without consulting the rest of the team. Through use of online communication and collective decision-making software Loomio, we’ve made decisions that reflect compromise and direct diplomacy and that don’t give authority to any individual team member.

Though centred in the UK, the Journal of Radical Librarianship has an international scope and we encourage submissions from anywhere in the world. We hope to publish work in multiple languages as a recognition that, in order to share knowledge as widely as possible, we should not preference one language over others. Submissions are accepted in any language.

Fundamentally the Journal of Radical Librarianship aims to provide a publication space for alternatives in librarianship discourse. In the LIS publishing landscape, there is little space for writing that challenges – or falls outside the assumptions of – society’s dominant neoliberal ideology. While much library publishing ignores the political context of library and information studies and presents libraries as politically neutral institutions, the Journal of Radical Librarianship situates LIS within the political framework of society and examines library issues from that perspective.

The Journal of Radical Librarianship is not unique in LIS publishing: several other publications produce work with similar scope. We acknowledge their value and hope to work together as complementary rather than competitive publications. Progressive Librarian is a journal produced by the US-based Progressive Librarians Guild; Library Juice Press is a publisher of a number of books on “theoretical and practical issues in librarianship from a critical perspective”; Collaborative Librarianship is a journal publishing work on cooperative librarianship. In the Library with the Lead Pipe can also be included in this list for its commitment to open-access and progressive publication practices and we’d like to thank them for giving us the space to write about the Journal of Radical Librarianship. This is just a selection of English-language publications in similar areas and demonstrates that there is an ecosystem of library and information authors interested in exploring radical and critical approaches. We want to position the Journal of Radical Librarianship as an attempt to enrich the existing community by applying innovative scholarly approaches to the field. 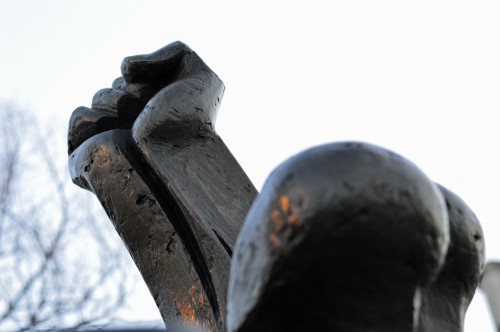 For peer-reviewed articles, we are looking for pieces that take radical approaches to subjects such as: information literacy, politics and social justice, scholarly communication, equality and diversity, library history, management and professionalism, and political economy of information and knowledge. Our editorial team is flexible and we will look at work outside those boundaries.

We’re also looking for non-peer-reviewed pieces. We accept editorials and commentary on relevant political issues or library issues. We’re also accepting reviews of media relevant to the scope of the journal. If you’re interested in becoming a reviewer, please contact stuart@journal.radicallibrarianship.org.

Thanks to the editorial team of the Journal of Radical Librarianship for contributions and feedback on this article and for all the hard work involved in setting up and running the journal. Thanks to Stuart Lawson for his sterling work on getting us up and running. We’d collectively like to thank the editorial team at In the Library with the Lead Pipe for giving us the space to contribute this piece and for their excellent editorial input.